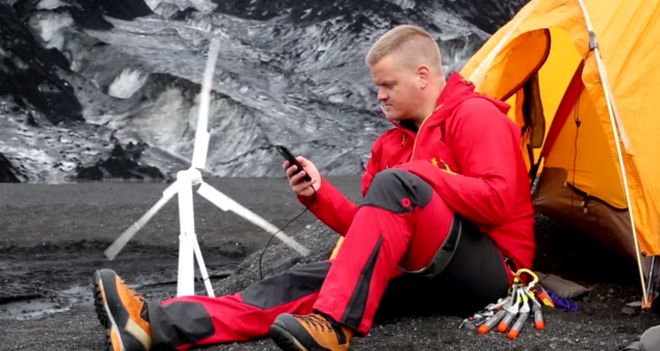 The turbine can power a smartphone battery 3 or 4 times on a single charge and it is capable of generating power even with wind speed of 4 km / h.

The Janulus company launched a Kickstarter campaign for new models – 400, 1,000 and 2,500 watts, the latter of which weighs 19 kg and can be installed in cabins or homes.The campaign reached the required amount of 50,000 dollars (already collected more than 80 000) and the first customers can book Trinity 50 for 369 dollars. Trinity 2500 will cost 5999 dollars. The turbines will be produced in Iceland for more control and better quality.

All Trinity turbines are designed so that they can switch between horizontal or vertical form factors, depending on the wind speed. The largest model has a built-in inverter, through which the device may serve as servicer generator.

You can plug Trinity to TVs, computers, small appliances and even electric car. All these versions have a connector that allows electricity to be fed straight into the grid.

The smallest model – 50 watt – is able to generate enough electricity to charge a smartphone or other small electronic devices, so it is suitable for multi-day adventures away from home. Larger models can easily be used at home, including the living and rental housing (provided that an external space).

It is expected that portable wind turbines will to appear on the market in April 2016.